Professor Antony Galione elected as a Fellow of the Royal Society

The Department of Pharmacology is delighted to confirm that Professor Antony Galione, Chair of Pharmacology at the University of Oxford, has been elected as a Fellow of the Royal Society. Professor Galione is one of 52 new fellows joining the Royal Society in 2016. The work for which he has been recognised was carried out entirely in the Department. 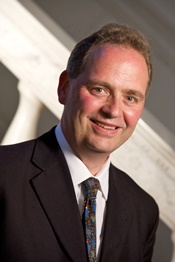 Professor Galione’s principal research interest is the regulation of intracellular calcium signalling by cyclic ADP-ribose and NAADP, emerging intracellular messengers for calcium mobilisation. This work has led to the identification of new biochemical pathways controlling calcium signals that regulate processes as diverse as fertilisation, secretion, contractility and neuronal excitability using a multidisciplinary approach based on confocal microscopy, video-imaging, electrophysiology, flash photolysis, microsomal calcium flux measurements and molecular and biochemical techniques. A new focus of his work is the study of the physiological roles of the family of the endolysosomal two-pore channels (TPCs) as the intracellular targets for NAADP and their role in calcium signalling.

Professor Galione was educated at Trinity College, Cambridge and received a BA in Natural Sciences (Part 2 Pharmacology) in 1985. Remaining at Cambridge University he obtained his PhD in 1989 having worked on the role of calcium oscillations in cell activation in Michael Berridge’s laboratory.

After a short spell at UCL working on mammalian fertilisation with Michael Whitaker, he went to Johns Hopkins University as a Harkness Fellow studying the role of calcium signals in early development. Returning to the UK in 1991, he joined the Department of Pharmacology. He has been successively a Beit Memorial Fellow, Wellcome Trust Career Development Fellow and Wellcome Trust Senior Fellow in Basic Biomedical Research. He was appointed to a titular professorship in Pharmacology in 2002, and was elected as the Statutory Professor of Pharmacology in 2006 in conjunction with a Professorial Fellowship at Lady Margaret Hall. He also was Head of Department from 2006 to 2015. He was Hayward Junior Research Fellow at Oriel College from 1992-1995, Staines Medical Fellow at Exeter College 1995-1998. From 1998-2006 he was Official Fellow and Tutor in Biochemical Pharmacology at New College and is now an Extraordinary Lecturer there in this subject. He currently holds a Wellcome Trust Senior Investigator Award. He was elected a Fellow of the Academy of Medical Sciences in 2010, and received the 2002 Novartis Prize from the British Pharmacological Society, of which he is currently a Trustee and Council member.

Speaking after the announcement from the Royal Society, Professor Galione said, “I am delighted that the field of calcium signalling by pyridine nucleotide derived messengers has been recognised by the Royal Society, and the field of pharmacology in general. I am grateful to David Smith for taking a chance on a young 27-year-old and appointing me to the Department in 1991. All the work recognised here was carried out in the Department and I cannot think of a better scientific environment and colleagues with which to work. I am grateful to all my colleagues in my laboratory over the years, and key collaborators in the Department, since this recognition is shared with them.”

Professor Nigel Emptage, Head of Department, said, “To be elected as a Fellow of the Royal Society is a marvellous accolade and a significant milestone in the career of any scientist. However, as I reflect on Antony’s success I cannot help but feel that recognition is deserved in one further respect; Antony has achieved this honour while working both as a scientist and an educator, having taught for both Department and College throughout his entire Oxford career. I am proud to be able to say that Antony is a member of the Pharmacology Department.”

Growing up as a Pharmacologist