Rhythms of the brain: uncovering a subcortical circuit that modulates cortical GABAergic neurons

Minas Salib, in the group led by Tim Viney and Peter Somogyi, has discovered a new type of neuronal pathway that may be important in memory. For the encoding and recall of episodic memories, nerve cells in the cerebral cortex are activated in precisely timed sequences. Rhythmicity facilitates the coordination of neuronal activity and these rhythms are detected as oscillations of different frequencies, such as 5–12 Hz theta oscillations. Degradation of these rhythms, such as through neurodegeneration, causes memory deficits. The medial septum, a part of the basal forebrain that innervates the hippocampal formation, contains neurons that fire with a high degree of rhythmicity (HRNs) and others that fire with a low degree of rhythmicity (LRNs). These distinct types of neuron may contribute differentially to the coordination of cortical neuronal activity. Minas and colleagues discovered that GABAergic LRNs preferentially innervate the dentate gyrus and the CA3 area of the hippocampus, regions important for episodic memory. These neurons act in parallel with the HRNs mostly via transient inhibition of inhibitory neurons. A figure from the paper describing these results was chosen to illustrate the front cover of the 5 June issue of Journal of Neuroscience. 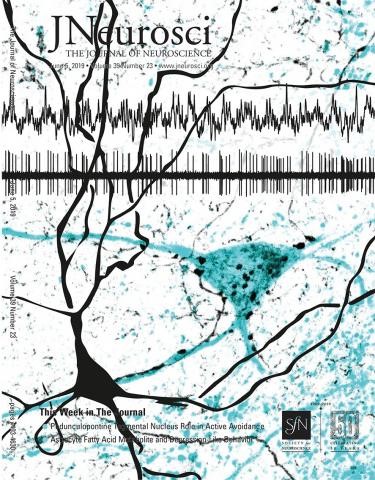 The medial septum is a specialised subcortical brain region that innervates the hippocampus and related cortical and subcortical areas of the brain involved in the encoding and recall of episodic memories. Rhythmic brain activity is required for processing memories, and the medial septum is thought to be responsible for implementing such rhythms in the cortex. In mice, high rhythmic burst firing nerve cells that release the neurotransmitter GABA send their axons from the medial septum to specific parts of the cerebral cortex, including to the hippocampus (see a previous report in this section by Joshi: https://pharm.ox.ac.uk/recent-discoveries/rhythmic-brain-signals-supporting-memory). These neurons rhythmically inhibit neurons coordinating cortical activity. Such highly rhythmic neurons (HRNs) are intermingled with low rhythmic neurons (LRNs), whose identities and spatio-temporal connectivity remained undefined.

Using electrical recordings combined with single neuron labelling in awake mice, Salib and colleagues could monitor LRNs and follow their axons to their cortical targets. They discovered that most medial septal LRNs in mice were GABAergic and that they target the CA3 sub-region of the hippocampus, along with an adjacent connected region, the dentate gyrus. In the image used for the cover of the journal, one such LRN is shown (black) with its cell body and dendrites within the medial septum (and innervating a GABAergic parvalbumin-expressing neuron (cyan) in the dentate gyrus by dozens of axon terminals (black). Movement-related activity of this LRN is shown by action potentials (bottom trace) occurring during ongoing rhythmic population activity in the hippocampus (upper trace). Thus, the LRNs complement the highly rhythmic neurons in a parallel pathway, providing subcortical control of GABAergic circuits in the cortex governing network activity in memory processes.

Congratulations to the group of Professor Nigel Emptage who have been awarded an MRC-AMED grant, worth £1m, in conjuction with the University of Tokyo and the RIKEN Center for Brain Science

This image of a blood clot composed of erythrocytes trapped by long fibrous chains of fibrin was judged the winner of the image competition at the BHF CRE 2022 Symposiium, held in December. In this image we can see false coloured erythrocytes (classic biconcave appearance around 5-10 µm in diameter) wrapped by fibrin network.

A group of researchers and students led by Dr Tim Viney visited Didcot Girls School to run a ‘hands on’ event about the brain at the school’s Science Club.

The feeling of being tired is familiar to everyone. As we know from our own experience, an extended period of wakefulness results in a decline in our performance levels, and the desire to sleep becomes almost irresistible. When you then fall asleep, your sleep is deeper and more consolidated than usual. And yet after just one night of uninterrupted sleep, you can feel refreshed and “back to normal”!