Although the University was officially founded in 1167, our Department began its life comparatively recently from a single room in the University Museum in 1912. Since then, we have grown to become one of the leading Pharmacology Departments in the UK.

High profile former members of the Department include:

Professor Paton was the creative mind behind the first effective treatment of high blood pressure, the facilitation of artificial respiration in an intensive care unit and the exploitation of oil and gas from beneath the North Sea. His first great discovery, made in 1949 with E. Zaimis, was that two different actions of the chemical neurotransmitter acetylcholine – causing muscles to contract and causing an increase in blood pressure (through activation of sympathetic ganglia) – could be separated by means of two antagonist drugs that differed only in the number of carbon atoms in a linear chain. Thus, we have: decamethonium, with 10 carbon atoms, the first specific neuromuscular blocking drug and the father of all modern drugs – used in surgery as muscle relaxants, and in intensive care to permit artificial ventilation; and hexamethonium, with six carbon atoms in the chain, the first drug that specifically and safely lowered blood pressure.

The second discovery concerned the cause of the changes that happen to deep-sea divers as they go deeper, leading to convulsions and death. Paton and his colleagues discovered that the cause was the high pressure itself, hence the term 'high pressure neurological syndrome'. At about the same time they were also studying the remarkable phenomenon of the ability of high pressure to reverse the anaesthetic effect of the gases. In an imaginative leap typical of Paton the question was asked: if high pressure could reverse the biological effects of anaesthetics, could anaesthetics reverse the biological effects of high pressure? Thus was born the idea of adding a third gas to the mixture that divers used, a gas (nitrogen) that was not an anaesthetic at normal pressures but that became an anaesthetic at the high pressures needed for deep dives. The resulting mixture of oxygen, helium and nitrogen (the so- called Tri-mix) is now used throughout the world and has enabled divers to work at depths of around 2,000ft.

Bill Paton combined his scientific work with an amazing appetite for public service: he was at one time the member of 72 committees, several of which he chaired. He succeeded to the Chair of Pharmacology at Oxford in 1959 and quickly became sought after for his advice by government, and for his incisive judgement by bodies such as the Clarendon Press, Rhodes Trust, Wellcome Trust and the Council of the Royal Society. He had a special interest in the history of medicine and was Honorary Director of the Wellcome Institute for History of Medicine from 1983 to 1987.

Sir John Robert Vane FRS (1927 – 2004) was an English pharmacologist who was instrumental in the understanding of how aspirin produces pain-relief and anti-inflammatory effects and his work led to new treatments for heart and blood vessel disease and introduction of ACE inhibitors. He was awarded the Nobel Prize in Physiology or Medicine in 1982 along with Sune K Bergström and Bengt I Samuelsson for “their discoveries concerning prostaglandins and related biologically active substances”. John Vane was born in Worcestershire and educated at King Edward VI School, Birmingham. He obtained a BSc in Chemistry at the University of Birmingham in 1946 before training as a pharmacologist under the tutelage of Professor J Harold Burn in Oxford. After obtaining his PhD in 1953 John Vane spent two years in the Department of Pharmacology at Yale University with the then chairman Dr Arnold Welch. In 1955 he returned to the UK to work with Professor W. D. M. Paton at the Institute of Basic Medical Sciences of the University of London in the Royal College of Surgeons of England.

He established the William Harvey Research Institute at St Bartholomew's Hospital Medical College in 1986 after twelve years as R & D Director of the Wellcome Foundation.

Professor Edith Bülbring (1903-1990) was one of the first women accepted as a Fellow of the Royal Society (in 1958) and was Professor of Pharmacology at Oxford between 1967 and 1971. She was educated in medicine at the universities of Bonn, Munich and Freiburg, and became research assistant to the pharmacologist Ulrich Friedemann. When he and other Jewish colleagues were dismissed by the Nazis, she was initially overlooked, because she was only partly Jewish (her mother was Jewish), but eventually she was dismissed too. 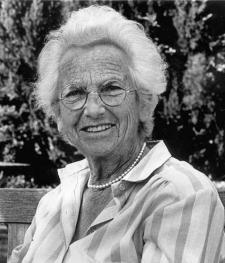 Together with her older sisters Luci and Maud, she traveled to England in 1933, where she joined the laboratory of Joshua Harold Burn at the Pharmaceutical Society of Great Britain at the University of London.

She remained as Burn's assistant until 1946, when she was appointed University Demonstrator and Lecturer, and began to conduct her own research independently. From 1950 until she retired in 1971 she led a flourishing research group exploring the physiology of smooth muscle, an area that had hitherto been neglected.

Bülbring's interest in smooth muscle was borne from frustration with their unpredictable responses. She has been quoted saying: "Using them [smooth muscles] for assays and always finding them totally incomprehensible; I just could not understand their behavior: why they would contract one time and relax the next hour to the same dose, at the same temperature, in the same conditions, and so forth. All these things upset me to such a degree that I did not want to work with them in this way anymore unless I understood them.”

In 1953 Gustav Born joined Bülbring in her work initiating a collaboration that became the origin of her smooth muscle group. Early on with the group, she researched the metabolism and passive electrical properties of smooth muscle. She also studied the role that serotonin plays in peristalsis in the small intestine. She innovated a double sucrose gap apparatus that she used in her experiments. Bülbring was concerned with the effect that neurotransmitters, particularly acetylcholine and adrenaline, have on smooth muscle tension. She published three papers on taeniae in 1969 which concluded that the hyperpolarization of the membrane that can be observed following the application of adrenaline is a result of the membrane's increased permeability to chloride and potassium.

Professor Hugh Blaschko (1900-1993) was a biochemical pharmacologist who become one of the leaders in the elucidation of the biosynthesis, storage and inactivation of sympatheic transmitters, such as noradrenalin. His work contributed information essential for the development of some valuable drugs, notably the sympathomimetic agents and the monoamine oxidase inhibitors. Blaschko also demonstrated the storage of highly active substances, such

as adrenalin, in inactive form in intracellular particles, from which they can be rapidly released when required.

After medical studies in Berlin and Freiburg, Blaschko began his research career with Otto Meyerhof in Berlin. Meyerhof's laboratory moved to Heidelberg in 1929, at a time when political intolerance was beginning to disrupt academic work. Luckily, contacts between Meyerhof and AV Hill in London enabled Blaschko to come to England in 1933. He joined the Physiological Laboratory in Cambridge and began the research on biochemical aspects of neurohumoral transmission. In 1944 Blaschko moved to the immensely active Pharmacology Department in Oxford where he remained until retirement.