Tell us more about your role: what do you do and how did you get to where you are now? 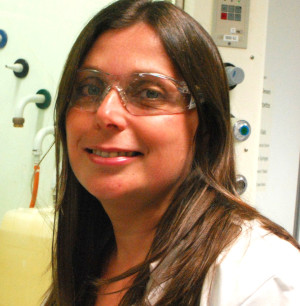 Today I am a Professor of Medicinal Chemistry jointly appointed between the Departments of Pharmacology and Chemistry. My role straddles two Departments and two Divisions in the University. My work, in common with others, is a balance of student supervision, project oversight and collaboration with other academics and companies, teaching and examining, grant and paper writing. I am also Editor-in-Chief of a medicinal chemistry journal and a Director of a new cross-disciplinary graduate studentship programme.

Inspired by my father to follow a career as a scientist (‘Angela, you’ll never be happy in a desk job’), I came to Oxford in 1996 to read Biochemistry. I quickly realised that to realise my own ambitions I needed a stronger grounding in Chemistry, and in 1997 I switched courses to complete my MChem degree in Chemistry. In 2000 I received an industrial CASE award to study for a DPhil in Organic Chemistry. Over the next three years I learned how to synthesize and measure the properties of bioactive molecules. This was a hugely important grounding for my postdoctoral studies from 2003-2007 in medicinal chemistry. My breakthrough came in 2007 when I was awarded a prestigious Research Councils’ UK Fellowship in Medicinal Chemistry jointly between the Departments of Chemistry and Pharmacology in Oxford. To my knowledge this was the first joint appointment of this type in the University.

In 2012 I was appointed as Associate Professor and in 2018 conferred as Professor of Medicinal Chemistry in the University’s recognition of distinction exercise.

I have always been strongly motivated to study at the interface of chemistry and biology. It seemed to me early on that there was so much to chemistry to discover underpinning cell function and physiology. Today I still believe this is true - we are only just beginning to unravel the complex interplay in biological systems between small and large molecules, metabolism and signalling and the important implications it will have on future therapies.

What is the most meaningful aspect of your work?

My own research lies at the interface of chemistry, biology and medicine. In this arena one of the major global challenges is addressing the diseases of ageing. Society is faced with an increasingly ageing population and an increased prevalence of age-related degenerative diseases. This is affecting countries world-wide - not only the most affluent.

In our work we aim to discover and translate new medicines which we believe will transform healthcare through delivering molecular regenerative therapies to tackle currently untreatable degenerative conditions and injury such as heart disease, neuro- and muscular-degeneration.

Can you tell us about something you’ve done, contributed to that you’re most proud of?

The work that I am most proud of to date is the unique medicinal chemistry approach to modulate gene expression we pioneered to treat fatal genetic diseases such as Duchenne Muscular Dystrophy. This is a programme that we have been involved in collaboration with Professor Dame Kay Davies over more than 15 years, from the basic science through to clinical translation. The University spin-out companies MuOx and Summit were based on our work. Summit, in partnership with our group, progressed ezutromid, a first-in-class utrophin modulator, into a Phase 2 clinical study for the treatment of DMD in 2017. The clinical trial showed evidence of efficacy and target engagement after 24 weeks of treatment, but these effects were not seen after the full 48 weeks of the trial. At the time, ezutromid’s target and molecular mechanism were not known and development had to be discontinued. We have since published two pivotal studies on ezutromid’s metabolism and mechanism of action which together rationalise the lack of sustained efficacy in the clinical trial. There remain relatively few examples of successful target deconvolution of drugs, and our work has paved the way for her work on the first target-based disease modifying drug discovery program in DMD. In October 2020 I was awarded a 2021 Harrington UK Rare Disease scholarship in recognition of, and in support of, our work on developing a therapy for DMD.

What changes would you most like to see in the Medical Sciences in the next 100 years?

I strongly believe that as scientists it is our duty and responsibility to strive to make a positive impact in the world. This may be through tackling healthcare and longevity, waste and pollution, world food production, sustainable energy/fuel sources or other important global challenges for the next century and beyond.

Collaboration between disciplines and between sectors is essential for us to make headway in tackling these issues, many of which are likely to take many years to solve. Many of these issues centre on the medical sciences and many more will be impacted by advances in medical sciences over the next century. In academia we are often fortunate enough to be able to trial nascent bold ideas and, if data supports progression, to develop these ideas over many years to maturity.

Beyond science, the biggest change I would like to see is in our research culture and environment. I am a passionate advocate for the promotion of equity and equality in science, striving to remove barriers, promote a positive and inclusive research culture and inspire the next generation of scientists, irrespective of gender, background or ethnicity. We have only just begun to recognise, let alone address many of these issues: to recognise implicit bias and its impact, to realise the important difference between equity and equality. It is critical that we tackle these issues as a community in the coming years and decades.