A new biomarker for cardiovascular diseases in older people

As we age, we often succumb to diseases of the cardiovascular system, which lead to ill health and are major causes of death. It would be valuable if the risk of developing these diseases could be known in advance so that steps might be taken to prevent them from developing. A collaboration between the Aging Research Centre at the Karolinska Institute in Stockholm and the mass-spectrometry laboratory of Professor Emeritus David Smith and Visiting Professor Helga Refsum has led to the discovery of one risk factor for these diseases: the ratio of plasma methionine to plasma total homocysteine (Met/Hcy).

and conduction disorders and peripheral artery disease. Nearly 2000 people over 60y living in Stockholm were identified who were free from any of these illnesses at baseline, when blood samples were taken. They were followed for up to 12 years and the incidence of these cardiovascular diseases was followed. As predicted from earlier work of Helga Refsum, higher baseline concentrations of homocysteine (Hcy) were associated with an increased risk of these diseases. But the opposite was the case for higher baseline concentrations of methionine (Met), which were protective. The ratio Met/Hcy was particularly strongly related to risk: those in the top (third) tertile had a 40% lower risk of developing one or more cardiovascular diseases than those in the bottom (first) tertile – see Figure. 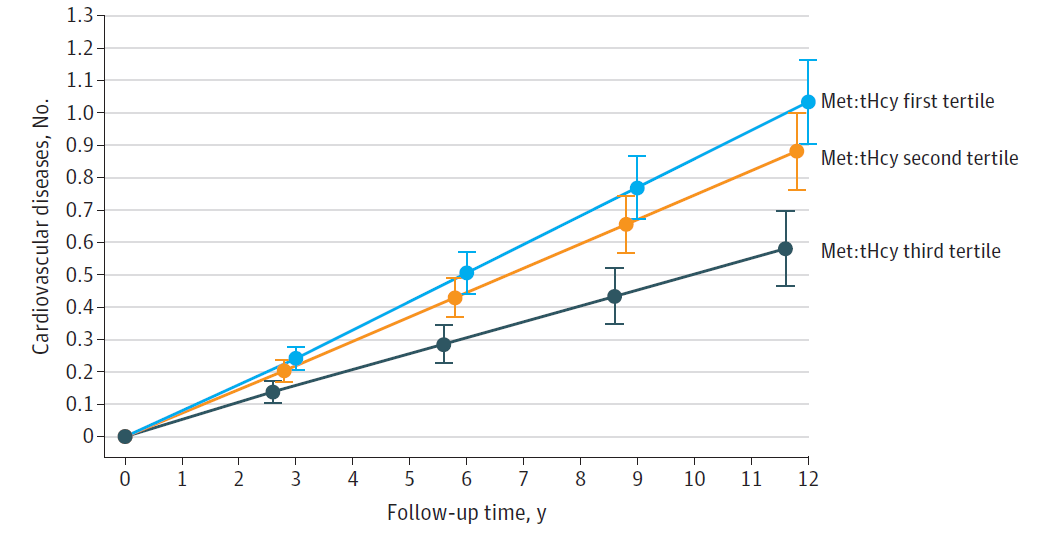 A low Met/Hcy ratio implies low methylation ability and methylation is a crucial step in many cellular processes. The discovery offers a way to prevent the development of cardiovascular diseases because poor methylation potential can be corrected by administering the B vitamins folate and B12. These results show how important it is to maintain a good B vitamin status as we age, which not only protects the cardiovascular system but also the brain, as the same group have shown previously (doi:10.1001/jamapsychiatry.2019.1694).