The Minichiello laboratory through an excellent interdisciplinary collaborative effort, particularly with the laboratories of Prof E. Cherubini at the European Brain Research Institute (EBRI) in Rome, Italy, and Prof JM. Delgado-García at the University Pablo de Olavide, Seville, Spain, have now uncovered a novel essential role for BDNF-TrkB signalling in driving sequential maturation of intrinsic hippocampal circuits. They show the in vivo consequences of Ntrk2/Trkb selective deletion at a time-sensitive window both on postnatal development and adult brain. 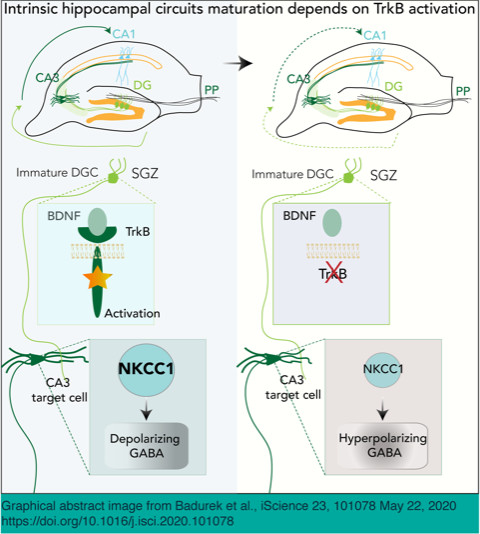 The hippocampus is a brain structure involved in several higher brain functions, including learning and memory, and spatial coding. It's divided into subfields, CA1, CA3, and the dentate gyrus (DG) that are interconnected in a feedforward loop. The DG that is the input region of the hippocampus plays a crucial role in these functions.

Most dentate granule cells in the rodent brain are generated in the first postnatal week. While the adult structure of the DG, including the subgranular zone (SGZ), where neurons are continuously generated, is established by the second postnatal week.

Early dysfunction of neuronal signalling at critical time-sensitive windows can lead to neurodevelopmental disorders. However, how developmental processes influence the formation of neural circuits and affect adult brain function is unknown.

To start tackling this problem, we have used a novel genetic mouse model and removed TrkB signalling selectively in immature dentate granule cells (DGCs) early in postnatal development coinciding with the integration time of these cells in the hippocampal circuitry.

Our study revealed that depletion of TrkB signalling at this critical time during postnatal development affects the integration and maturation of the newly generated DGCs in the forming DG. This, in turn, affects the target cells in the CA3 region of the hippocampus via reduced expression of NKCC1, which imports Cl− into the neuron. Reduced chloride triggers a premature shift of GABA action from the depolarizing and excitatory (as occurs immediately after birth) to the hyperpolarizing and inhibitory direction. The latter leads to structural modifications in the CA3 principal cells associated with alterations of network activity (also known as 'giant depolarizing potentials', which represent a primordial form of synchrony between neurons preceding more organized forms of activity like theta and gamma rhythms). Ultimately, this results in altered adult hippocampal synaptic plasticity and cognitive processes.

Overall, our results demonstrate that the activation of TrkB signalling at a critical time in postnatal development, contributes to maintaining intracellular chloride homeostasis crucial for the development of intrinsic hippocampal neuronal circuits. An alteration of these mechanisms at an early stage of development induces permanent cognitive defects as found in many neurodevelopmental disorders.