A world-leading pharmacologist who built up the Department 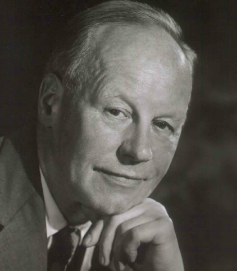 Since it was founded in 1912, there have been just five holders of the Chair of Pharmacology at Oxford and Joshua Harold Burn was the second of them. He held the chair from 1937 to 1959 and in this period he established the Department as one of the greatest such departments in the world, whose alumni were to become leaders in the field. Some 60 Professors and Directors came out of his Department and one of his pupils, JR Vane, was to receive the Nobel Prize. He joined the British Pharmacological Society at its creation in 1931, and gave the first presentation at the very first Society meeting on ‘Is cocaine a sympathetic stimulant?’ He then served as Secretary, Treasurer, Foreign Secretary and Editor of the British Journal of Pharmacology. As we heard last week, he received the Wellcome Gold Medal in 1979.

I first met him in 1963 since, in his retirement, he often attended weekly seminars in the Department and I was greatly impressed by his enthusiasm and sharp mind. He was unfailingly kind to me as a young and inexperienced researcher but he was also provocative and made me think hard about my experiments. He was a great believer in the community of scientists and established a tradition in the Department of a daily cooked lunch to which everyone attended, including distinguished visitors. In those days, the number of staff and students was small enough that he knew and cared for everyone. He had been elected to the Royal Society in 1942 and by 1959 the Department included three other Fellows (Blaschko, Bülbring, Ing): a total of 4 out of an academic staff of 7. No other Department came anywhere near such distinction.

Burn is famous for his work on the pharmacology of the autonomic nervous system and an excellent account can be found in his obituary in Biographical Memoirs (https://pubmed.ncbi.nlm.nih.gov/11616006/). He published 12 books, including the first and pioneering book on biological assay. We are privileged to belong to a Department that he played such a key role in creating.

The Rosalind Franklin Institute and the University of Oxford’s Department of Pharmacology have entered into a strategic partnership for Next Generation Chemistry.

New insight into the pharmacology of a therapeutic ion channel target

A new paper, published by the Tammaro lab in the Proceedings of the National Academy of Sciences (PNAS), shines new light on potential sites for pharmacological intervention within TMEM16A channels.

A new study, led by Professor Kim Dora in association with Professor Raimondo Ascione at the University of Bristol, has shown abnormalities in the tiny blood vessels of human hearts which cannot be detected by current heart scans. Poor myogenic (automatic) tone, where blood flow in these vessels is abnormal, is thought to develop independent of disease in the larger arteries, which can be treated using stents or bypass surgeries.

We were delighted to learn from the announcement today, 6 May 2021, that Professor Fran Platt has been elected a Fellow of The Royal Society. She is one of the 52 distinguished scientists whose election was announced, and one of the two biologists out of six Oxford academics so-honoured this year. https://royalsociety.org/news/2021/05/new-fellows-announcement-2021/